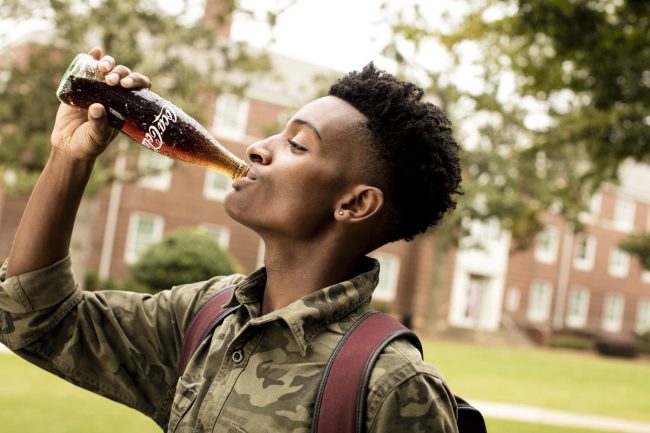 Building on the program’s five years of success, the Company will now offer up to 25 students a chance to win a $5,000 scholarship and a trip to the second Coca-Cola Pay It Forward Academy. Now through March 31, parents, relatives, friends and mentors may nominate an aspiring teen for the Coca-Cola Pay It Forward program by visiting www.coke.com/payitforward.

As a longtime friend of Coca-Cola, Gibson got his first break when he serenaded fans with the “Always Coca-Cola” theme song over twenty years ago in the famous 1995 Coca-Cola commercial. “I have long recognized the importance of helping young people reach out to grab their dreams,” said Gibson. “Returning to Coca-Cola, the place where I got my start, brings my story full circle and offers me another opportunity to help inspire, motivate and give back to our youth. I’ve learned it’s not lonely at the top if you help someone else get there.”

Gibson’s foundation recently awarded a $50,000 scholarship to a Compton teen to assist with his pursuit of higher education. His foundation, #TheLoveCircle, focuses on empowering youth. “The Coca-Cola Company has had a long relationship with Tyrese and he’s a part of our family,” said Racquel Harris Mason, vice president, Coca-Cola and Coke Zero brands, Coca-Cola North America. “His support of education and passion for mentoring truly reflects the goals of the Coca-Cola Pay It Forward program and we’re honored to partner with him as we work to empower the next generation.”

The Coca-Cola Company invites all communities to help teens achieve their aspirations by: nominating an eligible teen for the 2016 Coca-Cola Pay It Forward program; becoming a mentor; and/or donating to an academic scholarship. Share ways you are paying it forward and join the discussion on Twitter, using #CokePayItForward.

The Coca-Cola Pay It Forward program is open to high school students, grades 9-12 (nominees must be 13 by June 3), and the moms/guardians who love and support their academic and philanthropic endeavors. Nominators must be 13 years of age or older. Eligible high school teens may also nominate themselves. Potential winners will be selected and notified on or around June 20. Each winning student will receive a $5,000 scholarship to assist with his/her pursuit of higher education and a 3-day trip to the Coca-Cola Pay It Forward Academy in Atlanta, Ga. Nominations must be received by March 31.

About The Coca-Cola Company

The Coca-Cola Company (NYSE: KO) is the world’s largest beverage company, refreshing consumers with more than 500 sparkling and still brands. Led by Coca-Cola, one of the world’s most valuable and recognizable brands, our Company’s portfolio features 20 billion-dollar brands including, Diet Coke®, Fanta®, Sprite®, Coca-Cola ZeroTM, vitaminwater®, POWERADE®, Minute Maid®, SimplyTM, Georgia®, Dasani, FUZE® TEA and Del Valle®. Globally, we are the No. 1 provider of sparkling beverages, ready-to-drink coffees, and juices and juice drinks. Through the world’s largest beverage distribution system, consumers in more than 200 countries enjoy our beverages at a rate of 1.9 billion servings a day. With an enduring commitment to building sustainable communities, our Company is focused on initiatives that reduce our environmental footprint, support active, healthy living, create a safe, inclusive work environment for our associates, and enhance the economic development of the communities where we operate. Together with our bottling partners, we rank among the world’s top 10 private employers with more than 700,000 system associates. For more information, visit Coca-Cola Journey at www.coca-colacompany.com, follow us on Twitter at twitter.com/CocaColaCo, visit our blog, Coca-Cola Unbottled, at www.coca-colablog.com or find us on LinkedIn at www.linkedin.com/company/the-coca-cola-company.

Disclaimer: Coca-cola is a client of Blogalicious.