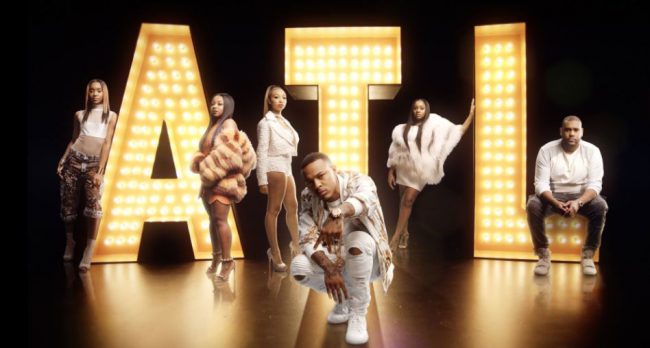 The season finale of Growing Up Hip Hop: Atlanta is finally here! The cast members have taken us on quite the journey as they’ve navigated young adulthood, sexuality, family drama, and life in the spotlight. From beginning to the impending end, we can agree that this show has kept us entertained and wanting more. The #GUHHATL hashtag has trended every Thursday night for the duration of the show and we can certainly thank our bloggers and influencers for their contribution to that number.

Several weeks ago, we did a preliminary roundup of blog posts from our Growing Up Hip Hop: Atlanta campaign. A few adjectives to describe the commentary are insightful, thoughtful, and downright hilarious! Today, we’re here for a final roundup of new submissions and POVs from our brilliant crew. And when you reach the bottom of this post, you’ll find a sneak peek at tonight’s season finale!

“This situation keeps getting out of hand and all Reginae wants is an apology. Brandon is holding on to his pride, meanwhile, everyone including his mom, Deb Atney, tells him to LET IT GO!! At 26 why does he keep arguing with Reginae? Ms. Deb is constantly telling him to think smarter. She knows that this can be career ending for him. Did I mention that part of the problem is that no one knows exactly what he does and/or who he is?”

From The Fab Empire:

“Unfortunately, with the parents’ names being thrown around, Reginae not only called her cousins but also asked her mother, Toya, to come talk some sense into Brandon. And Toya broke it all the way down. She told B, “You can’t save him, baby,” talking about her ex-husband, Wayne. “He’s already saved.” But I guess this really is “Growing Up Hip Hop,” because Reginae needs to grow up. Who asks their moms to fight their battles? But anyway…”

Danyelle from The Unfit Christian keeping it real about bullying,

“We know children bully; we’re running entire campaigns in our nation’s schools around anti-bullying. So we cannot excuse her behavior as simply child-like. Reginae, now 18, is a master manipulator and habitual line stepper who has wholly overblown her parents’ ability to protect her. While we should nurture the independence and courageous outspoken nature of women, we need to prepare them to navigate the world as well. Reginae’s secondhand bullying is going to garner her a firsthand fall flat on her face if she’s not careful.”

Naetorious on why Bow Wow is distracted:

“It’s really cute to see how much Shad enjoys his daughter, and also the friendship he still maintains with her mother, Joie. The three of them together probably sparked a few memories in his head.  At one point, Shad mentioned that he did his best work when they were together. He even set up a nice candlelight dinner for them to discuss the possibility of giving it another whirl. Due to his history of impulsive promises and lack of follow through, Joie declined his request. I’m sure that did nothing for Shad’s ego, nor did it motivate him to write or work a bit harder. It’s actually just another thing to distract him from his career goals at the moment.”

“Bow’s estranged father has been speaking recklessly via social media against Bow Wow. His father, who lives in Atlanta, was not a part of his life due to his alcoholism, and after an altercation between the two a few years ago, he has cut his father off completely. Bow has a conversation with his mom who encourages him to pray about it and move on, he can’t seem to let it go. Debra stops by his studio session to confront Bow about his relationship with his father because she also grew up with a family who suffered from alcoholism and could relate. She encourages Bow to have a talk with his dad to finally get it off his chest, but it still seems to be falling on deaf ears.”

The commentary didn’t stop there! Our bloggers went in with reviews, recaps, and live tweets about what this show meant to them in its first season. Here are a few more recaps to get into:

We hope you enjoyed these recaps and previous episodes of GUHHATL as much as we did. Here’s a sneak peek of tonight’s episode! Join in the conversation for tonight on Twitter as the season finale airs at 9 PM Est. Use the #GUHHATL hashtag and watch only on WEtv!