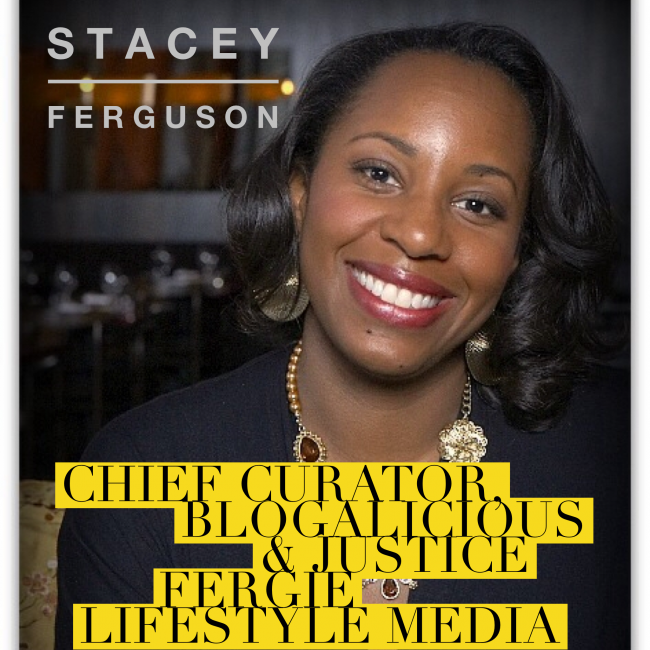 Inc.com listed 9 traits that define great leadership. The traits listed were awareness, decisiveness, empathy, accountability, confidence, optimism, honesty, focus and inspiration. Stacey Ferguson, founder of Blogalicious and Fergie Lifestyle Media, is a prime example of those traits at work, and thankfully, Team Blogalicious gets to witness them every day.

Stacey does what a lot of entrepreneurs and leaders don’t do in the age of social media, and that’s take a chance on new people who may be years shy on experience, but are filled with creativity, passion and ambition. Her passion for people has introduced thousands of bloggers and entrepreneurs to each other as well as big brands that they might not have met on their own. To add to that, she’s consistently taught courses on sponsorships this year for those who are serious about making money for their brands via webinars and intensives.

Blogalicious Weekend 2015, where the theme is Build Your Own Empire, will be a conference like no other because of our VIP Mastermind Day. In the past four weeks, we’ve introduced you to the event’s Power Presenters that include Aprille Franks-Hunt, Jessica Clark, Lamar Tyler and now our Stacey Ferguson. To learn more about Blogalicious’ fearless leader, read her biography below:

Since 2006, Stacey has grown the Blogalicious community to a movement of over 8,000 multicultural influencers. Through the Blogalicious b-Link Marketing Network, Stacey creates and activates influencer outreach and social marketing campaigns for brands and organizations including: Proctor & Gamble, McDonalds, Sears/Kmart, Aio Wireless, The US State Department and more. The cornerstone of the Blogalicious brand is its annual Blogalicious Weekend conference, produced by Stacey and her team since 2009, that is a 3-day educational and experiential event featuring high-profile speakers (such as Marc Morial, Amy DuBois Barnett, Soledad O’Brien) and major consumer brands (such as KIA Motors, Carnival Cruise Lines, Disney Interactive, General Mills, Johnson and Johnson and many more). She is responsible for a 200+% growth increase in both conference attendance and sponsorship revenues in 5 short years.

As Founder of Justice Fergie Lifestyle Media, she combines media, publishing, consulting & events to inspire women to live richly with strategies for turning personal passions into viable brands.  She regularly consults with both startups and established brands on digital and brand strategy, as well as influencer outreach and social media disclosure guidelines.

Stacey also is an accomplished public speaker, presenting at conferences and events nationally – from the ESSENCE Women’s Conference to SXSW to BlogHer to the Pennsylvania Conference for Women – and served as an Advisor for Media Bistro’s Summer Social Media Marketing Bootcamp.  She was a contributing tech writer or Babble (a Disney brand); a vlogger on the OMMA award-winning SheKnows’ Mommalogues; and is an inaugural cast member of Go Mighty.  She is also a proud ONE Campaign Community Partner, Shot@Life Fellow, and an advisory Board Member of ‘we teach’, Fanatchicks and iBlog Magazine.

Stacey has been featured in various media, including NPR, Fox, Southern Living Magazine, The Washington Post, The Loop21, Mashable, Sirius-XM Radio, Uptown Magazine, Black Enterprise, JET Magazine, Mommy Noire, The Tom Joyner Morning Show, and all around the Web. She has been named as a 2012 Best Brand of the Year by Stiletto Media and A Top 10 Black Innovator of 2013 by MVMT50 at SXSW.

She is a wife, and mother of 3 and resides in the DC Metro Area, and was an attorney in the US Federal Trade Commission’s Bureau of Consumer Protection, Division of Advertising Practices for 7 years, where she specialized in investigating unfair acts and practices relating to social media disclosures, spyware and adware, and peer-to-peer file sharing, among other hi-tech goods and services issues. Stacey received her B.S. in Telecommunications, with a specialization in Radio and Television Production from the University of Florida, and her J.D. from the Howard University School of Law. 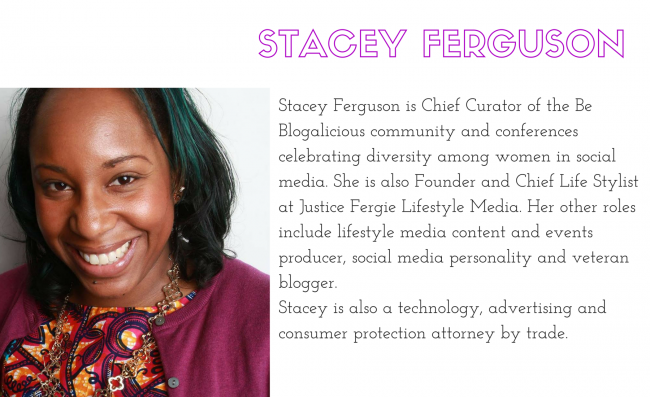